A Sufi of the Order of the Naqshbandis was asked:

‘Your Order’s name means, literally, “The Designers”. What do you design, and what use is it?’
He said:
‘We do a great deal of designing, and it is most useful. Here is a parable of one such form.

‘Unjustly imprisoned, a tinsmith was allowed to receive a rug woven by his wife. He prostrated himself upon the rug day after day to say his prayers, and after some time he said to his jailers:

‘ “I am poor and without hope, and you are wretchedly paid. But I am
a tinsmith. Bring me tin and tools and I shall make small artifacts
which you can sell in the market, and we shall both benefit.”

‘The guards agreed to this, and presently the tinsmith and they were both making a profit, from which they bough food and comforts for themselves.

‘Then, one day, when the guards went to the cell, the door was open, and he was gone.

‘Many years later, when this man’s innocence had been established, the man who had imprisoned him asked him how he had escaped, what magic he had used. He said:

‘ “It’s a matter of design, and design within design. My wife is a
weaver. She found the man who had made the locks of the cell door, and
got the design from him. This she wove into the carpet, at the spot
where my head touched in prayer five times a day. I am a metal-worker,
and this design looked to me like the inside of a lock. I designed the
plan of the artifacts to obtain the materials to make the key – and I
escaped.”

‘That,’ said the Naqshbandi Sufi, ‘is one of the ways in which man may make his escape from the tyranny of his captivity.’

there is much information hidden within ordinary things. the prayer had a purpose beyond what the jailers could see. it was instructional, instrumental, not the typical “prayer” we know in the west, not a laundry list of wants; book ended with praise and thanks, but a design within a design. a transformative process, for after the man escaped, he no longer needed the rug….

plans within plans, design within design…

work up to 88# KB snatch, get re-acquainted with heavy weight over head.

today was a rough day, too little sleep and too much thinking. i still hate the airdyne, and was suprised at how bad my legs hurt while holding the kettlebells. this particular test brought forth an interesting conversation, and one i have had many times, the psychological factor. standing there, holding kettle bells, your mind will take you to dark and ugly places. within the first five seconds of each half all i wanted is to be in my partners place. the grass is always greener. the hold is the interesting part to me. i like to leave that player alone. to give them time to traverse their own road to (emotional) failure. to know, to know in their bones that they can quit any time. that simply by NOT pushing with every inch the pain will stop. that they are in fact laying their flesh on the grindstone. we need to know that road, to read the signs and be able to drive it blind. we need to know how hard our body can scream for us to stop, and then keep grinding.

also, i signed a lease today. 1650 sqft. there will be more details in the next few days, but my hat has been thrown over the wall…

the test:
starting under one goal post, run to the other while dragging fat rope behind (~66′, around 50# dry, which it was not). coil rope, grab the opposite end and return to starting point, recoil rope. dont puke.

i believe the last time i did this test was 2 summers ago, it was the 3rd time in as many months and i trimmed my time down to 96 seconds (if memory serves me). the feeling of the drag is a bit like hill runs, but uphill both ways. patrick asked me if there was a trick, if pacing played a part, and i honestly dont know. this is a rare occasion where i feel its better NOT to use the legs for the first rope pull because they are going to need that little reprieve, for the last rope pull, use everything you have. its a great test to see someone hit a wall, it comes suddenly, and often with little warning, and depending how far along the athlete is, it can be one hell of a grind. 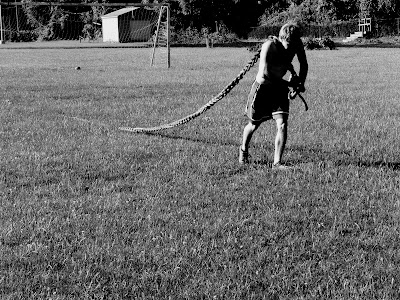 66 feet of rope can be one hell of a anchor. 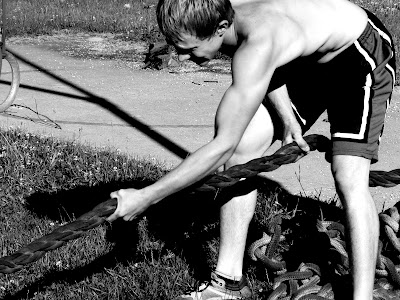 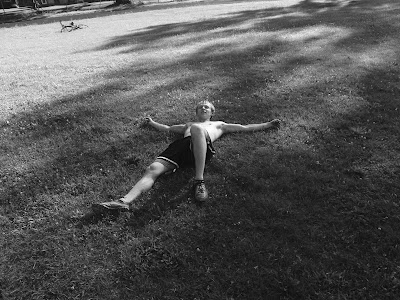 and when that rope is nearly 50% of your bodyweight, the cost can be surprising… 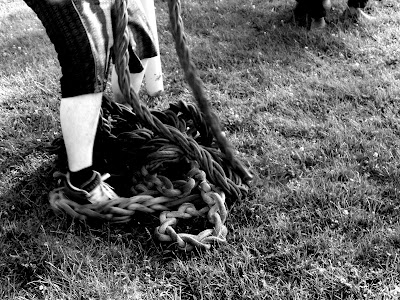 airdyne while everyone else gets a turn

(computer for concept 2 rower is out so…)
p1. airdyne for calories
p2. fat rope tension on blue band (hold arms out straight with band taught but not stretched, when airdyne starts, pull fists to hips and hold on)

I was standing in a golds gym in bozeman, montana when a friend sidled up next to me; he nodded towards a couple of guys strapped into the pec-deck…. we had seen them here before, always working their routine; chest and bi’s day, back and legs, shoulders and tri’s. 4 exercises each muscle, 3 sets of 10 with a splash of cardio. same machines. same time… my friend, he nods towards these guys and asks me about consequences. he asks me what affect working on these machines, the same program day in and day out might have on a persons personality. linear movement. isolation. tracks. safety. how, he asks, does this affect their problem solving ability? he asks me if i think these guys are getting more conditioned than they are aware of. he asks me this, and walks away.

our conditioning determines our reality. a simple truth dropped on me that same week in montana. those simple words turned out to be the entrance into the rabbits hole. physical condition governs possible and impossible, separates game from sport from test from impasse. physical conditioning is the exchange rate in which we trade work for results. physical conditioning, however, can only get us so far. our mental and emotional (spiritual) conditioning governs how we see the world, how we react to stress, to joy, to competition and to failure…. we condition ourselves through language, through thoughts, through every unconscious action, we reinforce where we are at the moment. i guess the question is where do you want to be? it is so widely accepted that competition and sport is 10% physical and 90% mental, but does your training reflect this? do you have standards ? was that last rep “good enough”? what exactly are you conditioning? look to the alpine climbers for inspiration, 99% of a pull-up means you fell off the mountain and died. 100%, anything less is simply not. have standards. condition integrity. work smart. work with a partner. build trust and keep each other honest. learn that failing in front of someone is not the end of the world. that failing in the gym is better than failing in the real world. court failure, get to know your limits, the signposts of physical and emotional collapse. condition yourself to adapt to new situations. full range of motion conditions your flexibility. change directions. to go a little further than you once thought possible. develop a workout that actually scares you. just a little, just enough that you have to face the physical symptoms of panic. fear creates a clarity. a focus. savor it. experience it. control it. if you use all the knowledge you have, all the ass in your jeans, and a little grace from god you just might pull through. what, do you think, are the long term consequences of facing panic and overcoming it with hard intelligent work? what exactly are you conditioning? its not just what you do, but how (and why) you do it…

this is where philosophy has consequences.

* training does not exist in a vacuum, nor does the philosophy behind it. the work we do is heavily influenced by mark twight and the gym jones project (www.gymjones.com), the works of idries shah, along with mountain athlete (www.mtnathlete.com), PAST skills (www.pastskills.com), and countless others….

we get what we deserve, or at least what we earn.