warmup:
work up to heavy back squat

max Deadlifts at bodyweight without setting bar down

i also did 50x burpees as a penalty. initially i had planned on doing the back squats at bodyweight, but i talked myself out of it, convinced myself it was “overreaching” and, simply, chickened out. this was a failure on the behavior end and such failures need correcting. 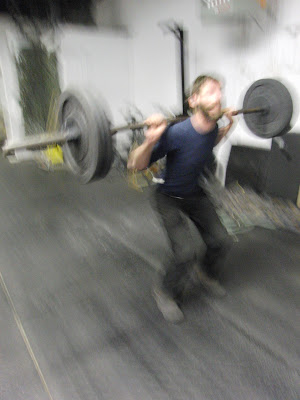 consequences have an interesting way of changing ones behavior. 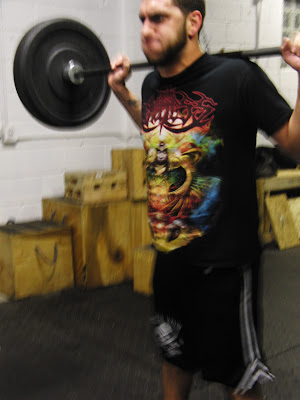 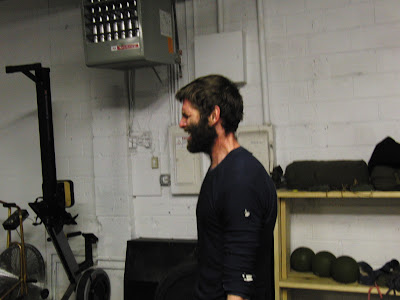 for the Deadlift test, the question is “how long can you hold on?”

-b: got some athletes set up for the SSST and decided to join them and practice pace. got 151 in 8 minutes w/ 53#, and felt really good, pacing was steady for 5 minutes, then sped up for the last 3.

airdyne work happened at the end of the day, arms only score was 107, legs only score was 142. i feel that my arms should be helping me more during my standard airdyne work and thought this was too perfect to pass up. i was hoping for 300 calories total, and missed by a long shot. i did find some pacing that felt good in the last half of the legs only, and will have to apply that in the coming week.

i have been doing better with recovery work, and my shoulder is only rarely an issue, i definetly recommend finding a good ART practitioner for anyone spending a lot of time in the gym. 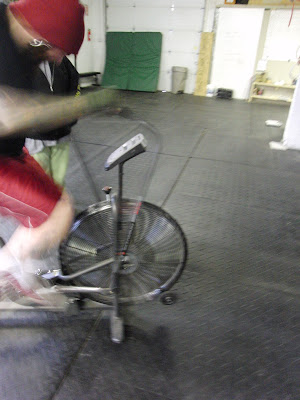 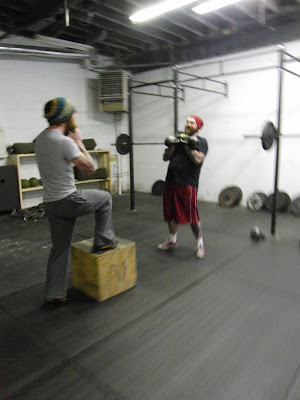 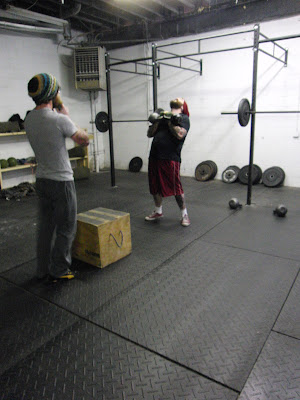 hard work today. run, ride, lift, plank. still not at the level i want, but getting there.

latley i have been remembering a teacher of mine – we were starting a six month program and he addressed the students – told us he would learn more from us than we would from him. at the moment, i felt he was just being humble, but since i have started teaching others – those words echo back on a near daily basis. taking responsibility for others flipped a switch in my head,

and the frustration that goes along with it.

a lot went on in the gym this last week, but not much by me. a touch of flu, while not forcing total rest, made even recovery workouts feel sluggish. the facinating thing is the voices. the deamons. that constant questioning if i am slacking, that knee jerk response to respond to discomfort by owning it. pouring salt into the wound. to punish oneself for that desire to quit by forcing another rep, another meter.

i am trying to be smart, smarter than that. but it is hard. there is always that doubt that i am not that sicktiredover-trained. that if i want it bad enough i can have it…

and there is a time for that. there is a time to sacrifice, to pay the price for success or survival with a pound of flesh, to hurl ones self into a task, into a contest, with no safety net and no reservation.

that test however, does not happen in a gym. does not happen as a part of ones training. there are things we do to try and ensure that on that day we are willing and able to carve off that price – with deliberate movements and a steady hand.

work is coming back – it hurt today, and i was not thrilled with the results. but one of the first things i learned when i started training was this little gem from Mark Twight – “you can’t look good and improve at the same time”

row. 500m must be completed every 2 minutes. continue until failure

“Listen to advice given from experience. it cost a great deal, but you are not charged for it.” – idries shah (probably others but that is where i got it.)

i had planned on doing this on wednesday, but i dont think it would have had the desired effect, so i did a bit of strength and moved it down the line. planning is great, but so is flexibility, remember the reason you made the plan in the first place. with goals, or even solid reasons, we can weigh each day against the desired outcome and see if our plan is still applicable. yesterday was a recovery day and i put 10k on the rower in 45 minutes (keeping stroke rate around 25 SPM), some more good advice i received recently was that recovery workouts can be just as meaningful as your hard days, i still suck at pacing, but if i do three 30-45 minute recovery workouts a week where i focus on pacing, where i work to set that habit, there will be effects. even today i felt better with my pace, i took 1 break in the first round of squats, never during swings and when i did (during pullups and between movements) i tried to limit it to 5 breaths, and always asked myself if resting any longer was going to have a positive outcome on my work…

i was on the receiving end of a lot of great advice in 2010, i owe a lot to the the GYMJONES family, with a special thanks to Michael Blevins and John Frieh – now i just have to put it into action. the best way, the only meaningful way, to thank a teacher is to use what you have been taught.

for the support, for the advice, this is the only thanks i can offer. to deserve it. to earn it.

and another thanks to Mark Twight for this gem (via the SALVATION site): “don’t let all the shit you know keep you from putting it to use.” – i think i needed to hear that. 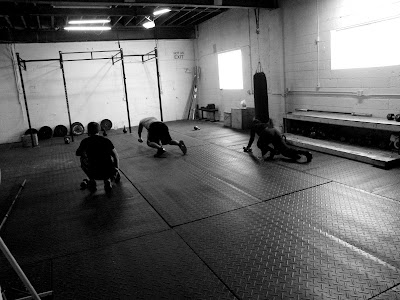 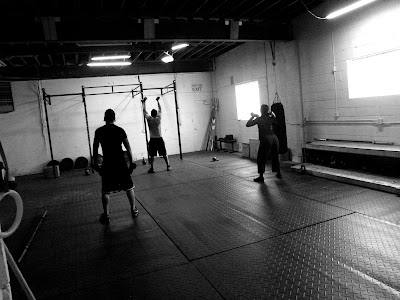 4x FSPP. a few laps usually gets the point across. 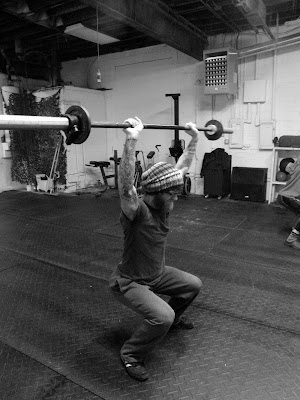 Jonathan requested this picture be taken (although probably jokingly). grip width can have interesting effects on ones overhead work, and ones limits. 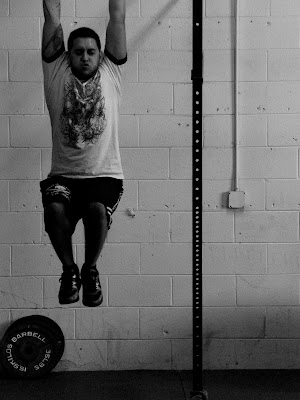 Warmup on the rower

today was scheduled for a power/endurance, it was meant to be ugly. it was not in the cards.

still adjusting to the new schedule, but i am screwing up less, and that is progress.

my training has taken a back seat in the last 12 months, i put in many hours, but volume without direction has limited growth potential at best, and can be disastrous. the past 2 weeks have been dedicated to creating a schedule, to adding and subtracting certain elements and taking a little more control of my conditioning. for starters, my endurance sits somewhere between sucks and shitty on the continuum. i aim to remedy that.

the goal was to get 1 extra m per interval…

did i mention i suck at pacing.

my plan was to start at 150 m and work up from there, i thought it would be reasonable, and it might have been, but somehow my dumb ass did 163 the first round. i thought about calling a mulligan and simply starting over, but there was some self flagellation in order…

many (if not most) individuals are more in need of the later. that is to say, their short comings have more to do with compliance, with adherence, as opposed to technology. making these changes is simple. its training. at times i mean rolled up news paper kind of training. i mean dinner chimes. i mean schedules for every day. while i agree that measuring and weighing every piece of food is as much of an eating disorder as sticking a finger down ones throat, consideration must be given to the goal. to the cost and perceived benefit. obsessive compulsive disorder can be debilitating, but under the right circumstances and with a measure of control it simplifies and streamlines our life. behavior creates habit. be conscious of that fact.

take control of your conditioning.

set a goal.
make a plan.
execute it.
evaluate it.
repeat.

there are many small changes in the gym this week. time will tell if they have the desired effect.