“your wishes are very small things in this world… you are valuable because of what you can do, not what you want.”

this is not sad. this is not negative. this is a reminder that your wants, wishes and intentions are your own, and no help to anyone else unless, until, you act upon them. not only act upon them, but actualize them. i don’t want to hear your plans. i don’t even want to hear my own at this moment. i want to do. i want to make. implement. become. to grow. and to cut out that which is not useful. talk is cheap, and occasionally self sabotaging. there is not enough time. there is too much to do… 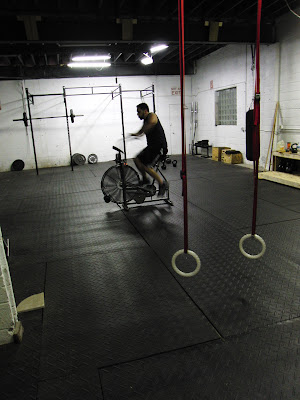 20 calories on the airdyne – directly to front plank for equal time. 5 rounds. 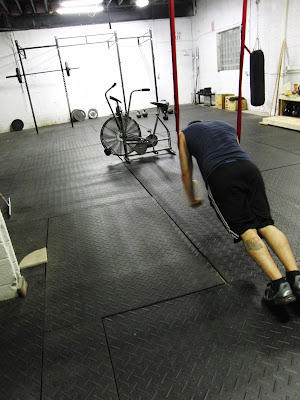 while your wants and intentions guide your actions, in the moment they are meaningless.
it is action. it is ability. currency. it is the will and the means to pay what is required.

watch what you say.

words, for all their ineffectualness, form the framework of how we see the world. we use language to create our expectations, to guide our experiences. something changes in the telling, we can remake memories, we can loose detail or gain favor. we can frame our losses as wins and our bullshit excuses as valid reasons. all we have to do is tell ourselves over and over and over again. “can’t” and “won’t” are not the same thing, neither are “need” and “want”. be honest. what do you need? what “can’t” you do? say you won’t. say you don’t want to. take the responsibility. forget social nicety and be honest. if you look at a task as being impossible you wont be surprised if you fail. its ok to call things hard when they are but realize that the way you think shapes things. we constantly sort and compartmentalize our world. we fit things into boxes that we understand and are all too quick to truncate or mislabel out of fucking laziness or in an attempt to protect our ego. here is a question, what use is an ego that is so easily shattered? what kind of “self” isn’t up to that kind of test? our sense of self is a tool. it can be a weapon. it is the root, the why and the how. so make it hard. keep a keen edge. wield it with the confidence that comes from a familiarity with its essence, and its limits. lies stick like rust and too much time in the dark can leave it brittle and ineffectual. test your metal. your temper. flex and grind, break and rebuild. these words are not accidents, and these tools are not for display. if they are beautiful it is because they are functional. useful. crafted deliberately – with a goal in mind. and they are for me as much as anyone who might be reading them.

there have been some experiments happening lately. tests of the effects of consequences and self image. a warmup of throwing medicine balls at 13′ targets where the weight you choose determines the amount of hits you have to score, and any misses must be atoned for. and what was initially designed as a “tag team” style workout turned into an interesting study in incentive. an active phase (row for meters, box jump, airdyne for calories, whip smash, pullup) paired with a static hold (FLR on rings, slosh pipe overhead hold, Ring support, Tuck hang, and wall sit, respectively) the player completes the active round and then must immediately hold the static for equal time. if time is achieved the player graduates to the next task; if it is not, the goalpost is moved (reduced by 20-25%) and the player must repeat the test.

the goals were reasonable and the incentive was strong enough, and as of yet no one has had to repeat a task, although there were some very tense moments. it led to joking around about the idea of “if you aren’t failing you aren’t trying hard enough”, because how much can you know about yourself if you have never been in a fight? in all seriousness it was a useful day, both physically and psychologically, experiments are interesting, but the work must be done – our goal in improvement, not entertainment. 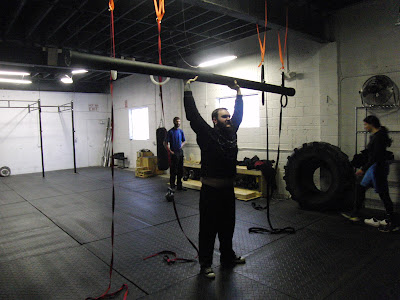 that being said, watching a friend battle the 10′ slosh pipe can be pretty entertaining. 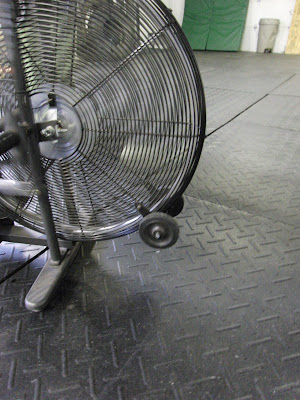 a fine teacher, a ruthless judge.